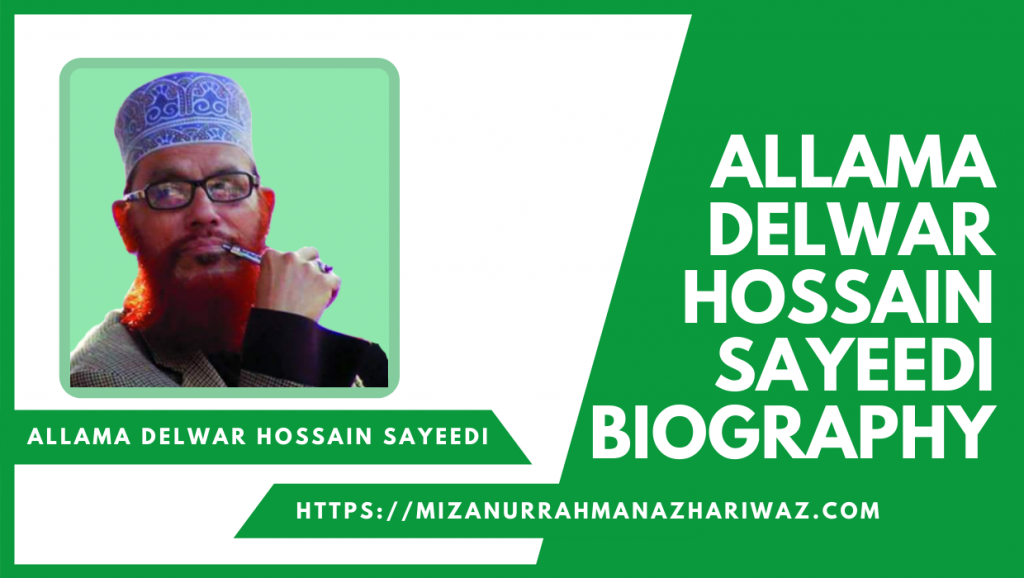 Allama Delwar Hossain Sayeedi is an Islamic speaker, lecturer, politician who served as a Member of the Parliament of Bangladesh from 1996 to 2008.

Allama Delwar Hossain Sayeedi completed his primary education at his father’s Madrassa. Later he studied in Khulna Alia Madrasa for some days and later in 1962, he passed Kamil from Sarsina Darussunnat Kamil Madrasah. After passing Kamil, he studied for 5 years on various languages, religions, sciences, politics, economics, foreign policy, psychology and various theories.

From 1967 onwards, he became a “Dayi Ilallah”. Mawlana Delwar Hossain Sayeedi was invited over half a hundred countries of the world to bring forth the great ideals of Islam to the people. Here is a sample of his 50 years of Islamic propaganda in Bangladesh: –

1. At Chittagong parade ground, 3 days ‘’Islamic Tafsir Program’’ was held for a long time of 29 years. The honorable Imam of the Holy Ka’bah Sharif attended the ceremony twice as chief guest.

6. At Dhaka Kamalapur Railway grounds and Paltan grounds, 3 days ‘’Islamic Tafsir Program’’ was held for a long time of 34 years.

1. Allama Delwar Hossain Sayeedi has been performing Hajj as a royal guest on the Saudi invitations since 1976.  Every year from 1990 to 2008, Ramadan became his daily routine of staying in Makkah Madinah.

2. On the invitation of Imam Syed Ali Hussaini Khomeini in 1982  Allama Delwar Hossain Sayeedi visited Tehran to celebrate Iran’s first revolution anniversary. In 1991, he joined the Kuwait – Iraq war memorial meeting at the invitation of the Saudi king. In 1991, the Islamic Circle of North America awarded him the title “Allama”.

3. In 1993, Maulana Delwar Hossain Sayeedi was awarded the “Grand Marshal” medal at the American Muslim Day Parade Conference in front of the United Nations in New York. He presented the Qur’an in the United Arab Emirates on December 8th, at the invitation of the Government of Dubai in front of more than 50,000 listeners.

4. Mawlana Sayeedi was invited and accompanied by the honorable Imam of the Ka’ba “Shaykh Abdur Rahman as Sudais” at the inauguration of the London Muslim Center. More than six hundred Non-Muslim brothers and sisters accept Islam in the hands of Maulana Delwar Hossain Sayeedi.

Pilgrimage: Mawlana Delwar Hossain Sayedee performs the Holy Hajj every year from 1976 to 2010.

Allama ​​title: He was awarded the title “Allama” by the Islamic Circle of North America in 1991.

Desire: The death of a martyr

2nd arrest: 28 June 2010. He is now in jail for life imprisonment in the alleged war crimes case on appeal. Loving him, about more than 150 Bangladeshi Bani Adam was martyred in protest against Invalid judgment, wish forgiveness for their souls, Amin. ’’Let us all pray for the birds of the Quran’’

At Last: ‘’O Allah, please liberate Hossain Sayeedi, the bird of the Qur’an and make every arrangement for staying with the dawah work, Amin’’